American Life Expectancy Depending On State


Life expectancy tells us the average number of years of life a person who has attained a given age can expect to live. Life expectancy estimates from the National Center for Health Statistics provide a reliable snapshot of population health and mortality in the United States.

The National Vital Statistics Report published recently has captured a six-year gap in life expectancy between American states with the highest and lowest estimates at birth.

Based on data collected in 2019, Hawaii had the highest average life expectancy: 80.9 years. On the lower end, Mississippians born in 2019 could expect to live an average of 74.4 years, according to the Centers for Disease Control and Prevention's National Center for Health Statistics.

According to the report, America’s national average life expectancy for 2019 was 78.8, which is slightly up from 2018. Since the center collected this data on the eve of the pandemic, the effects of COVID-19 on life expectancy statistics have yet to be fully documented.

The longest-living states tended to be more financially well-off

Hawaii's impressive life expectancy(80.9 years) appears to be tied to more than just the surf and sand and relaxed pace; this state also has one of the higher median household incomes, after the District of Columbia, Maryland, and New Jersey.

According to Elizabeth Arias, the lead author of the CDC report, life expectancy and socioeconomic status tend to follow similar geographic patterns. "Really well-to-do areas had really high life expectancies," she said, noting that just nine percent of Hawaii residents lived below the poverty line in 2019.

While these maps don't line up perfectly,  many of the reported wealthier states had relatively high average life expectancies in the 2019 report as well as previous analyses. States with the highest life expectancies coming in on the rankings after Hawaii(80.9) were California(80.9), New York(80.7), Minnesota(80.4), Massachusetts(80.4), Connecticut(80.3), New Jersey(80.1), Washington state(80), Colorado(80) and Vermont(79.8). It is worth noting that with the exception of Vermont, these states' median incomes were between $5,000 to $15,000 higher than the national average in 2019.

Many of those states had relatively high percentages of residents living below the national poverty line. NBC reported that Mississippi had the largest portion of people in poverty in 2019 at 19.5%, according to the US Department of Agriculture.

According to a report on ABC, smoking tobacco is also more prevalent in the Southern states. Another report from the CDC also suggests that the South and the Midwest states have higher rates of obesity than other regions in the US, according to the CDC, in addition to having poorer access to healthcare in some of the Southern states. Kaiser Family Foundation's State Health Facts reports that Mississippi, Tennessee, and Oklahoma have some of the highest uninsured rates in the country adding to poorer health outcomes.

While Mississippi was listed as having the lowest life expectancy (74.4 years) across populations in this report, West Virginia had the lowest average for women at 77.3 years. However, the report also found that the life expectancy was higher for women than it is for men in every single state and in Washington, D.C. 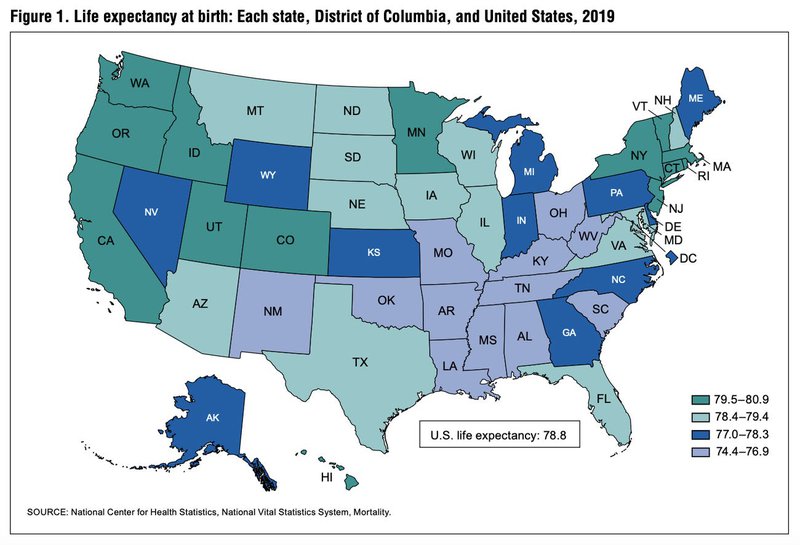