Nanotech guru turns back on 'goo' 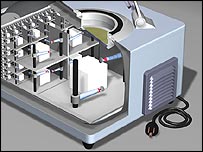 Nanomachine "factories" could one day sit on a desktop

Eric Drexler now says nanomachines that self-replicate exponentially are unlikely ever to enter widespread use.

In the journal Nanotechnology, he stresses that tiny machines would need close control in order to be efficient.

Dr Drexler says when he made the statement in the 80s, he underestimated the impact it would have on the field.

Nanotechnology is an umbrella discipline concerned with engineering objects and working devices from individual atoms and molecules.

"What I did not expect was that efforts to quiet concerns over grey goo would lead to false scientific denials of feasible technologies," Dr Drexler, chairman emeritus of the Foresight Institute in Palo Alto, US, told BBC News Online.

"I also underestimated the popularity of depictions of swarms of tiny nanobugs in science fiction and popular culture." 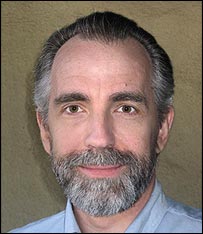 I thought it was important to outline a worst-case scenario

Dr Drexler originally floated the grey goo idea in his book Engines Of Creation, published in 1986.

He described a hypothetical scenario in which self-replicating nanomachines able to break down biological material could run amok, replicating exponentially and turning terrestrial life into mush.

Drexler explains that, at the time, he was concerned the excitement at the potential benefits of nanotechnology would overshadow the inherent risks and dangers.

"I thought it was important to outline a worst-case scenario so that those learning about nanotechnology could not consider the benefits without understanding potential risks," Dr Drexler explained.

But he stopped short of saying the scenario was impossible, adding that it "is well within the realm of physical law".

In his latest paper Drexler and co-author Chris Phoenix of the Center for Responsible Nanotechnology (CRN) propose a manufacturing model in which nanomachines could duplicate themselves without the risk of runaway replication.

These systems would be exponential, in which one machine makes another machine, both of which then make two more machines, so that the number of duplicates increases in the pattern 1, 2, 4, 8 and so on until a limit is reached.

But simplicity and efficiency will favour those devices that are directed by a stream of instructions from an external computer, argue Drexler and Phoenix. They call this controlled process "autoproduction" to distinguish it from self-replication. 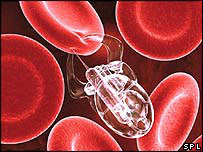 The authors believe the use of nanotechnology to develop new kinds of weapons poses a far more serious threat. These weapons could be produced in unprecedented quantities and could lead to a new arms race.

"People get a bee in their bonnet about how they're going to destroy the world," Dr Jeremy Sloan, a chemist and materials scientist at the University of Oxford told BBC News Online.

"But some of the more mundane industrial methods cause spectacular environmental problems and don't get as much attention. There are great potential benefits to this technology, but you have to be realistic about the hype."

A grey goo catastrophe was the subject of the science fiction novel Prey, by best-selling author Michael Crichton.

It was one of the scenarios referred to in a book by Astronomer Royal Martin Rees, in which he gives humanity a 50-50 chance of surviving the century. Prince Charles, too, has voiced his concerns about the potential risks of nanotechnology.