Australian biotech Ena Respiratory is developing a nasal spray that may help to boost the immune system to fight off the flu and common colds, and according to the company it has significantly reduced the growth of coronavirus in a recent animal study, and it may not only help to treat COVID-19 but it may also help to prevent it.

INNA-051, is being developed by the biotech, and laboratory experiments have shown that it reduced viral replication by as much as 96 percent in the animal study. Spearheaded by Public Health England’s (PHE) Deputy Director, Professor Miles Carroll, the new study described the potential treatment and has been published in the open-source preprint server bioRxiv*.

Used as a nasal spray, it aims to boost the natural immune system of the body to fight common colds and flu. It works by triggering the innate immune system, which is the body’s first line of defence against infection from a pathogen. When the drug has enhanced the immune system, it also prevented the infection and replication of SARS-CoV-2 in the laboratory.

The research team from the National Infection Service, Public Health England (PHE) wanted to develop the nasal spray to prevent the replication of the virus in the nasal area, the most common point of entry of the virus. To test the nasal spray, the team obtained nasal wash and throat swab samples four days before the viral challenge. Upon analyzing the viral RNA in nasal wash samples, the team confirmed infection in all treatment groups, with lower viral RNA levels seen in the INNA-051 treatment. The team has found that prophylactic intra-nasal administration of INNA-051 in the SARS-CoV-2 ferret infection model has reduced levels of viral RNA in the nose and throat.

“The results of our study support clinical development of a therapy based on prophylactic TLR2/6 innate immune activation in the URT to reduce SARS-CoV-2 transmission and provide protection against COVID-19,” the team wrote in the paper.

Further, the research team added that the prophylactic approach is important to people at a high risk of community transmission or development of the severe disease from COVID-19, such as older adults, people with comorbidities, and those who are immunocompromised.

“We’ve been amazed by just how effective our treatment has been. By boosting the natural immune response of the ferrets with our treatment, we’ve seen a rapid eradication of the virus,” Christophe Demaison, the Ena Respiratory Managing Director, said.

“If humans respond similarly, the benefits of treatment are two-fold. Individuals exposed to the virus would most likely rapidly eliminate it, with the treatment ensuring that the disease does not progress beyond mild symptoms. This is particularly relevant to vulnerable members of the community. In addition, the rapidity of this response means that the infected individuals are unlikely to pass it on, meaning a swift halt to community transmission,” he added. 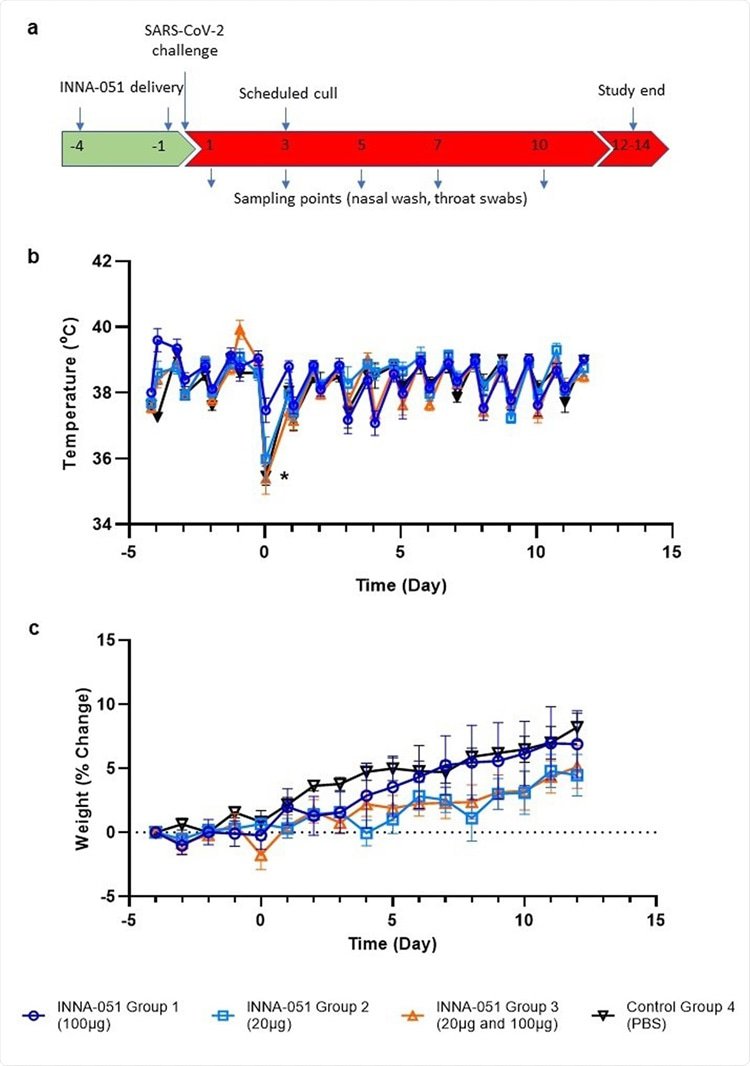 Clinical observations accompanying image Fig 1A  from the report: (a) Schematic of experimental design. Ferrets received INNA-051 and PBS treatments 4 days and 1 day prior to challenge with 5.0 x 106 pfu/ml SARS-CoV-2. Nasal wash and throat swabs were collected at days 1, 3, 5, 7, 10 & 12 post-challenge (p.c.) for all treatment groups and control group. Scheduled culls were performed for 6/24 ferrets on day 3 p.c. and 18/24 ferrets on days 12-14 p.c. (b) Temperatures were measured twice daily (approximately 8 hours apart), using implanted temperature/ID chips. Mean temperatures +/- standard error of the mean (SEM) are displayed. Temperature dip post-SARS-CoV-2 challenge (*) was attributed to sedation. (b) Weight was recorded daily and percentage change from the ferret weight prior to treatment plotted. Mean percentage weight change +/- SEM are displayed.

*bioRxiv publishes preliminary scientific reports that are not peer-reviewed and, therefore, should not be regarded as conclusive, guide clinical practice/health-related behaviour, or treated as established information.