What is Anti-Aging Medicine?

Anti-aging medicine is the pinnacle of biotechnology joined with advanced clinical preventive medicine.  The specialty is founded on the application of advanced scientific and medical technologies for the early detection, prevention, treatment, and reversal of age-related dysfunction, disorders, and diseases.  It is a healthcare model promoting innovative science and research to prolong the healthy lifespan in humans.  As such, anti-aging medicine is based on principles of sound and responsible medical care that are consistent with those applied in other preventive health specialties. The anti-aging medical model aims to both extend lifespan as well as prolong healthspan -- the length of time that we are able to live productively and independently.

Anti-aging medicine is the following: 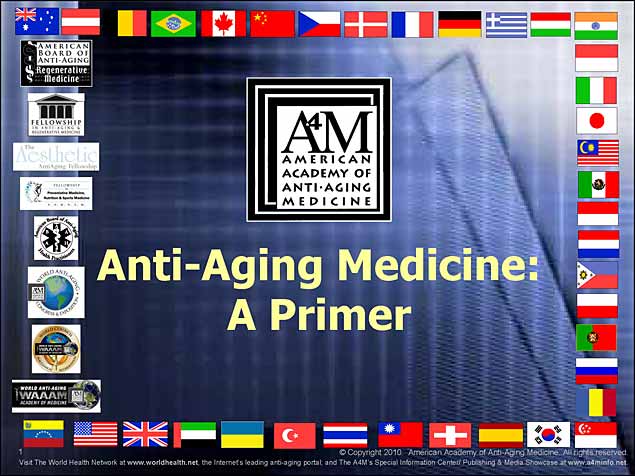 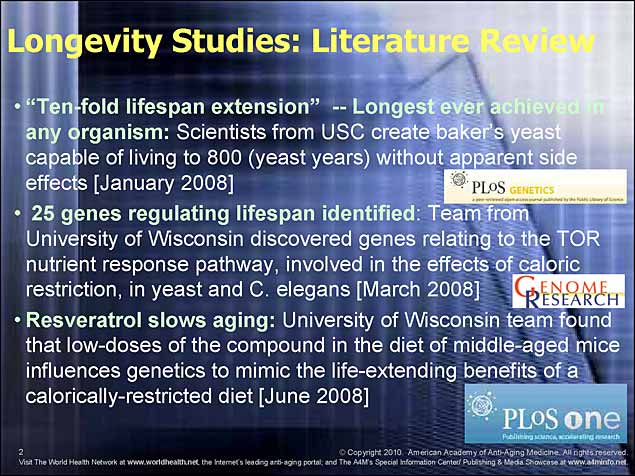 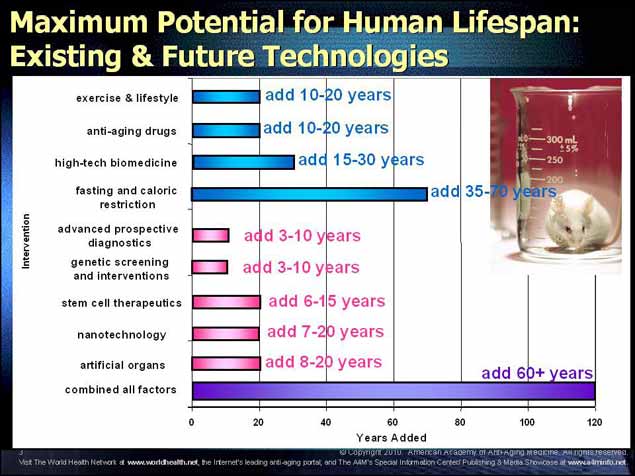 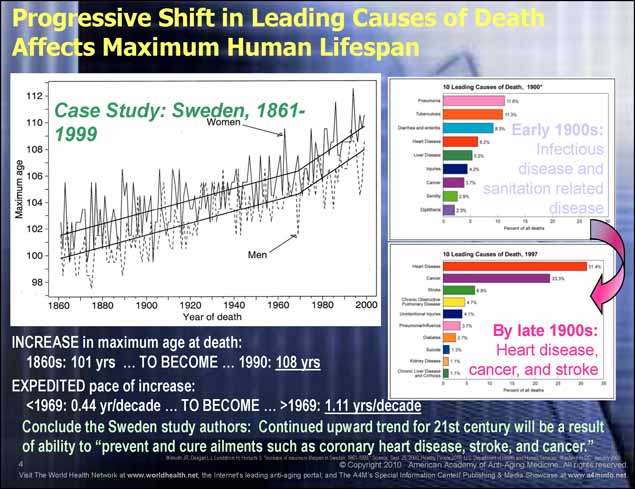 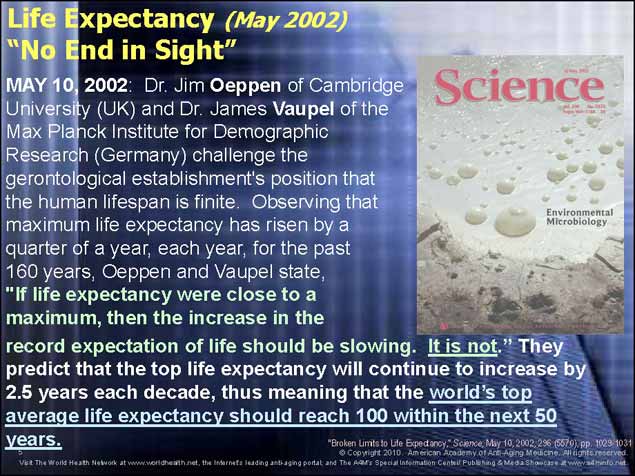 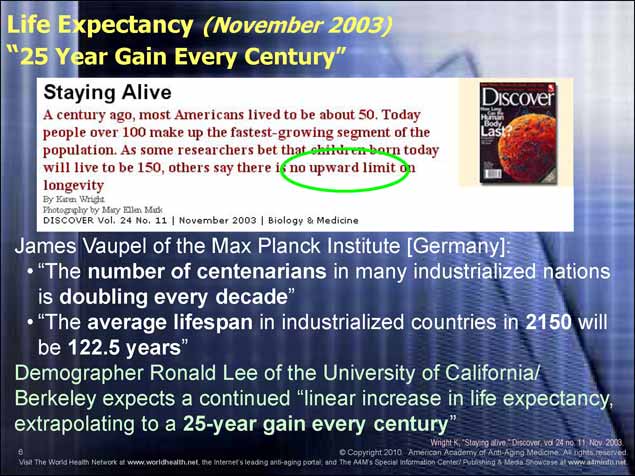 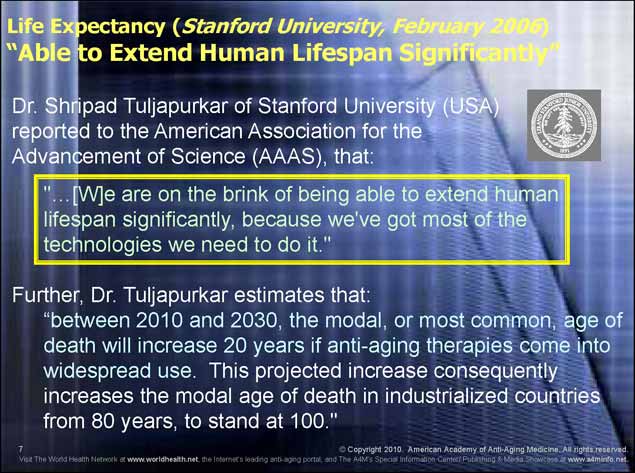 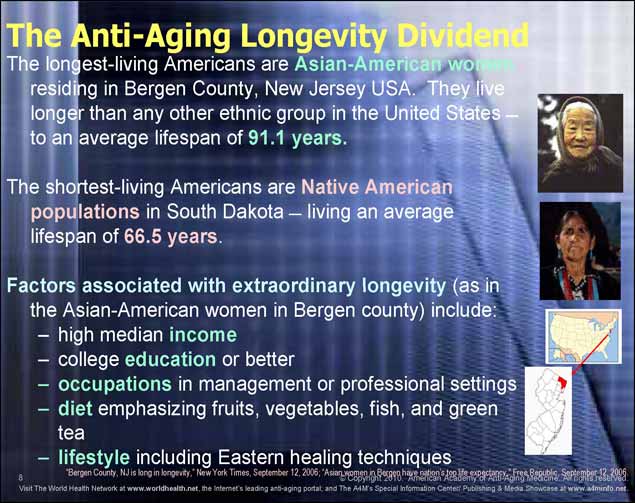 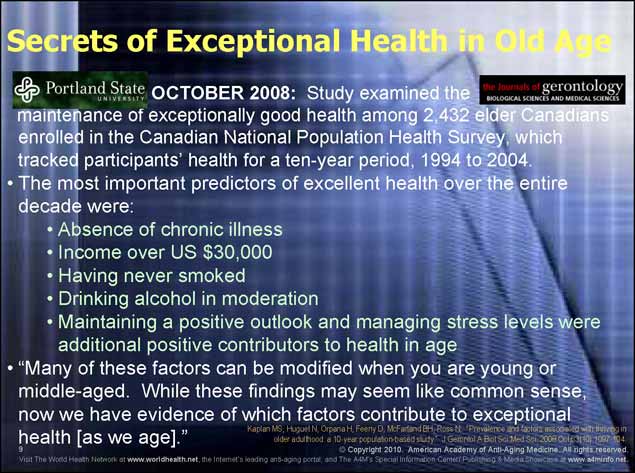 Hundreds of scientific research studies clearly prove that modest interventions in diet, exercise, nutrition and single-gene modulation in the laboratory setting beneficially and significantly impact healthy function in old-age.  Many of these interventions also modify maximum lifespan by 20 to 800% as well. With over the near-daily advancements in biomedical technologies related to research specifically focused on elucidating treatments for aging-related disorders and modulating the metabolic dysfunctions associated with old age, in the imminent near-future, effective interventions will become widely available to modulate the aging process itself in humans.

Researchers from the Harvard School of Public Health have found that the anti-aging lifestyle can add 24.6 more years of productive lifespan. The research team found that the longest-living Americans are Asian-American women residing in Bergen County, New Jersey USA.  They live longer than any other ethnic group in the United States  to an average lifespan of 91.1 years.  In contrast, the Harvard team found that the shortest-living Americans are Native American populations in South Dakota, despite receiving free or low-cost government provided medical care  living an average lifespan of 66.5 years.  A distinguishing characteristic of the Bergen County women’s longevity is that they are availing themselves of the armament of state-of-the-art biomedical technologies in advanced preventive care, including preventive screenings, early disease detection, aggressive intervention, and optimal nutrition – all of which are cornerstones of the anti-aging medical model. [“Bergen County, NJ is long in longevity,” New York Times, September 12, 2006; “Asian women in Bergen have nation’s top life expectancy,” Free Republic, September 12, 2006.]

A first-ever study reveals the secrets of exceptional health in old age. Mark Kaplan, from Portland State University (Oregon, USA), and colleagues utilized the Health Utilities Index Mark 3 (HUI3), a multidimensional measure of health status, to examine the maintenance of exceptionally good health among 2,432 elder Canadians enrolled in the Canadian National Population Health Survey, which tracked participants’ health for a ten-year period, 1994 to 2004.  The researchers found that the most important predictors of excellent health over the entire decade were:

The team comments that: “Many of these factors can be modified when you are young or middle-aged.  While these findings may seem like common sense, now we have evidence of which factors contribute to exceptional health [as we age].”  [Kaplan MS, Huguet N, Orpana H, Feeny D, McFarland BH, Ross N.  “Prevalence and factors associated with thriving in older adulthood: a 10-year population-based study.”  J Gerontol A Biol Sci Med Sci. 2008 Oct;63(10):1097-104.]

Around the world, people are seeking medical guidance for ways to stay healthy, active, and vital well into their older years.  As a result, the principles of the anti-aging lifestyle are gaining rapid and widespread acceptance as a framework for lifelong habits for healthy living.