CBD INCREASES BLOOD TO THE BRAIN

“I am glad to share with you what I have learned throughout my personal quest to overcome adversity to become an accomplished neurosurgeon, scientist, Ironman athlete, consultant, author, and advocate on healthy living and nutrition.”  ~ Dr. Joseph Maroon.

Researchers at University College London have reported in healthy people high dose CBD increases blood flow to the memory area of the brain. The article was entitled – The effects of acute cannabidiol on cerebral blood flow and its relationship to memory: An arterial spin labelling magnetic resonance imaging study(The image is from this report)

Here they reported on 15 healthy subjects who were found to have increased blood flow to the hippocampus (the memory section of the brain) after taking 600 mg of CBD.  The researchers reported the increased flow may explain some of the observed benefits of CBD for reducing anxiety and easing dementia symptoms. If the study is replicated, other possible benefits may include: 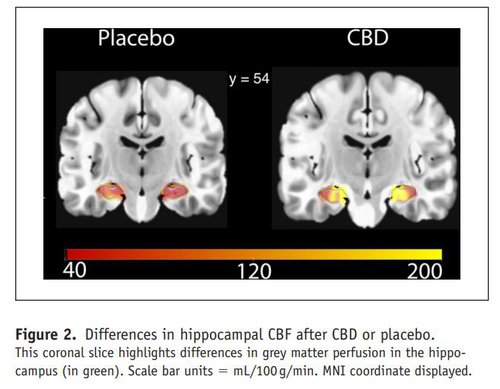 Although the researchers noted more research is needed, there is now evidence that acute CBD causes a significant increase in regional CBF to the hippocampus. These findings may have implications for the potential use of CBD across a range of disorders associated with hippocampal dysfunction including Alzheimer’s disease, PTSD and depression.

Joseph Maroon, MD, FACS, among his accomplishments he is Senior Vice President of the A4M, board-certified neurosurgeon, best selling author, keynote speaker, sports medicine expert, triathlete, and one of our medical editors. Dr. Maroon is an expert and consultant in the areas of sports nutrition, concussion management, personal fitness, and brain and spinal problems, he has cared for numerous celebrities and high-level athletes, as well as being an internationally competing Ironman triathlete.