Research on aging suggests that dietary restrictions will help to slow aging to extend health and lifespan. Eating such a diet has been shown to extend lifespan and delay age related disease in many species, but a recent genome wide analysis of 160 genetically distinct strains of D.melanogaster fruit flies published in Current Biology shows that health and lifespan are not linked under dietary restrictions.

According to the researchers from Kapahi Lab at Buck Institute average life and healthspan were increased, but the details are complicated. Nutrient dependent changes in lifespan were measured and age related changes in physical activity were tracked to measure healthspan; 97% of the strains showed some health and lifespan extensions in response to dietary restriction, but only 50% showed significant positive responses to dietary restriction for both. 13% of the strains were more vigorous but died earlier with dietary restriction, 5% lived longer but had more time in poor health, and 32% showed no benefits or detriments or negative responses to both.

“Dietary restriction works, but may not be the panacea for those wanting to extend healthspan, delay age-related diseases, and extend lifespan," said Pankaj Kapahi, Ph.D., Buck professor and senior author on the paper. "Our study is surprising and gives a glimpse into what's likely going to happen in humans, because we're all different and will likely respond differently to the effects of dietary restriction. Furthermore, our results question the idea that lifespan extension will always be accompanied by improvement of healthspan."

Genes were found to influence health and lifespan in a diet dependent manner using genome wide analysis. The decima gene was identified which regulates lifespan in the fruit flies; inhibiting this gene extended lifespan by reducing the production of insulin like peptides but this did not improve age related decline in physical activities. The daedalus gene was also identified, when inhibited this delayed the age related decline in physical activity upon dietary restriction but this only minimally influenced lifespan.

The lifespan and physical abilities were tracked for over 50,000 fruit flies during this study.  "It's hard to ask and get relevant results in individuals," said postdoc Kenneth Wilson, Ph.D. "With this method, we can ask questions in a much more robust manner and get answers at the population level."

"Most experiments focused on lifespan and healthspan are done in a single strain of animal. Researchers usually do an intervention in one or a few backgrounds," said Kapahi, adding that negative results are rarely reported, resulting in corroboration bias. "Our study takes an unbiased, systematic approach, to ask whether healthspan and lifespan traits are linked. We need to do more of this in the field."

"Other traits associated with healthspan are also important to measure. We need to understand the genetics of age-related decline in other functions, such as vision and cognition. Working in simple animals, like the fruit fly, is a great place to do this efficiently. One lesson we have learned is that lifespan extension should not be the gold standard for determining the best means of dealing with age-associated maladies,” adds Kapahi.

"Lifespan-extending discoveries tend to get a lot of hype in the media as a way to cure all age-related maladies," said Kapahi. "People need to be aware that their genetic background will likely have a major impact on how they will respond to an intervention. There is a need to develop markers in the field so we can predict how an individual will react to any particular intervention in terms of improving health and lifespan."

"The majority of people are much more interested in being healthy for as long as possible. I think most people, if given the choice, would choose an intervention that would give them extra years of good health over extra years of disability,” notes Kapahi. 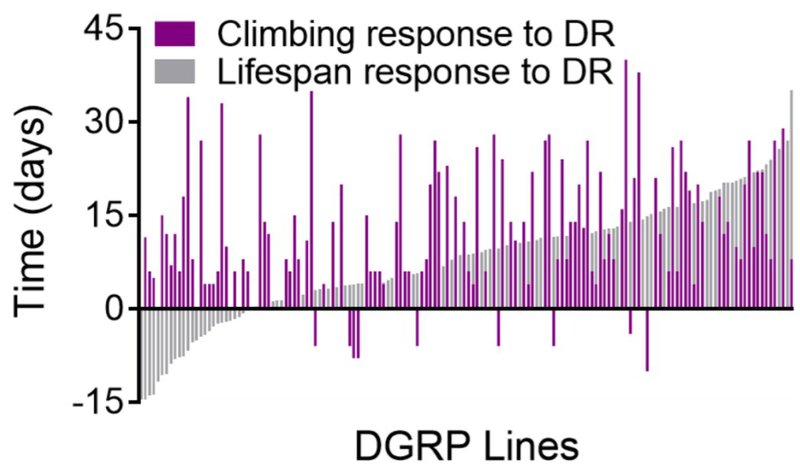