Over One Third Of The Poorest Countries Face Undernutrition & Obesity


According to a newly published report in the journal The Lancet, over one third of the world’s poorest countries are suffering from undernutrition and obesity.  The report suggests that the problems are being caused by the increasing availability of ultra-processed foods and beverages along with major decreases in physical activity.

Executive Summary from the report:

“The double burden of malnutrition is the coexistence of overnutrition (overweight and obesity) alongside undernutrition (stunting and wasting), at all levels of the population—country, city, community, household, and individual. This four paper Series explores how this coexistence is affecting low-income and middle-income countries. Malnutrition in its many forms has previously been understood and approached as a separate public health issue, but the new emergent reality is that undernutrition and overnutrition are interconnected and, therefore, double-duty actions that simultaneously address more than one dimension must be implemented for policy solutions to be effective. In addition to policy recommendations, the Series includes a focus on both historical and biological contexts, and new economic analysis.”

According to Francesco Branca, lead author of the report who is also the director of W.H.O’s Department of Nutrition for Health and Development, the world is now “facing a new nutrition reality” in which people across the world are facing undernutrition and obesity at different points in their life.

“We’ve really noticed the nutrition situation is changing in the world, and then we have the epidemic of obesity, which is expanding very quickly in these low-income countries,” said Branca. “But at the same time, we haven’t seen the reduction in the undernutrition — the stunting and wasting — we were expecting, and so now more and more countries with lower-middle income have these two conditions simultaneously.”

This report has called the trend the “double burden of malnutrition” and has found that it is affecting 45 out of 123 countries in the 1900s which increased to 48 out of 126 by the 2010s; with over 150 million children having stunted growth and 2.3 billion overweight people globally. According to the researchers there is an overlap of severe malnutrition conditions from the individual levels to the community level.

Survey data was used from the world’s poorest countries to classify those with the double burden, with the criteria that 15% of the country population having a lower than average weight for height; more than 30% of its children aged 0-4 having lower than average height for age; over one fifth of women aged 15-49 having a BMI of less than 18.5; and over 20% of the population having a BMI above 25.0.

The report suggests that 14 countries with some of the lowest incomes had been developing the double burden since the 1990s, and fewer wealthier countries still classified as low-middle income had been affected, widening the gap.

Indonesia was identified as the largest country with severe double burden, along with many other Asian and sub-Saharan Africian countries in particular; and countries such as Botswana, Zimbabwe, and Guatemala were among those with the highest prevalence of the double burden in the last decade.

Branca suggests that one of the common drivers leading to the double burden is a country’s food system not being able to deliver enough healthy foods to its population, paired with the increasing ease of access to cheap, heavily processed, unhealthy foods which have in particular caused the trend to manifest.

“We found that there is an intimate biological connection between the undernutrition and the overweight in countries where children are born with low birth weights, or in countries where children develop growth retardation in the first years of life,” said Branca. “Then we have a higher likelihood that those people become then overweight adolescents, and then adults.”

“This is a condition that is transmitted from one generation to the next, and mothers and who are not well-nourished give birth to children who are also with low birth weights, but also may lead to children who have then metabolic disturbances that are going to experience later in life.”

The potential economic costs of the double burden are also outlined in the report, as health effects can be translated into lost wages, lost productivity, and higher medical expenses over the long term.

The report calls for nations to implement changes to their food system in order to address this problem which range from increasing the quality of food at production, to policies to address the pricing and marketing of foods, to providing pre-adolescent kids with access to nutritious meals.

“Continuing with business-as-usual is not fit for purpose in the new nutrition reality,” Corinna Hawkes, a professor from the University of London’s Centre for Food Policy, said in a press release.

“The good news is that there are some powerful opportunities to use the same platforms to address different forms of malnutrition. The time is now to seize these opportunities for ‘double duty action’ to get results.” 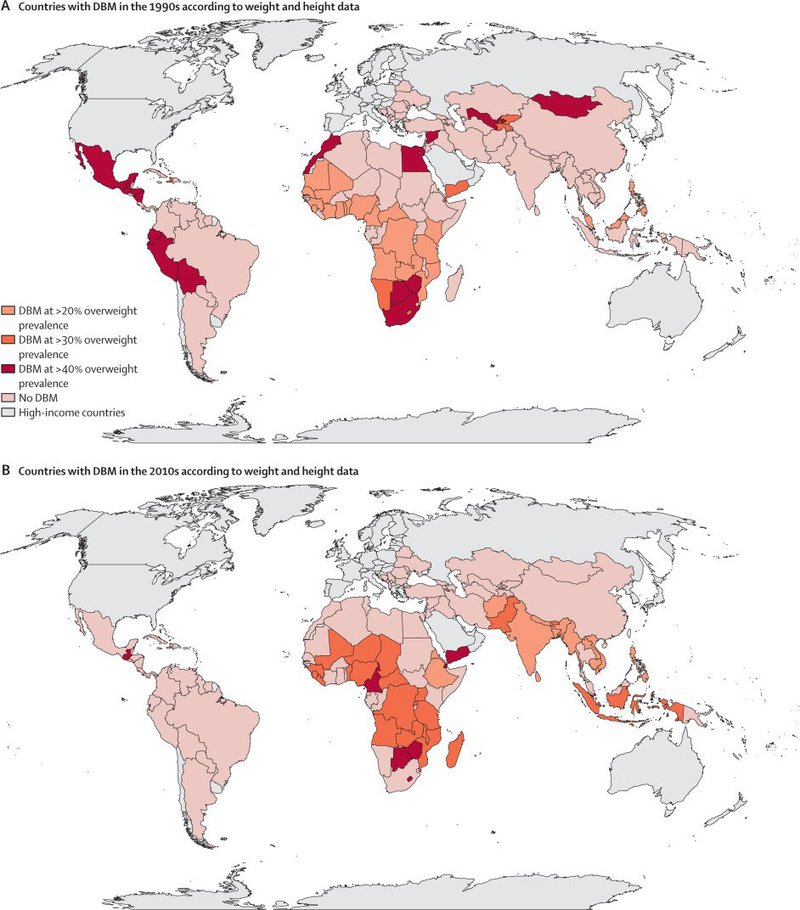 Image: The global double burden of malnutrition in low-income and middle-income countries based on weight and height data from the 1990s (A) and 2010s (B). Credit: The Lancet

Image: The global double burden of malnutrition in low-income and middle-income countries based on weight and height data from the 1990s (A) and 2010s (B). Credit: The Lancet