Do You Live In A Cat Or Dog State?


Ask anyone with a floof and they will tell you that their fuzzies are not just animals they are family. In fact, some people think that animals are better than humans. They provide entertainment, emotional support, exercise, snuggles, stress relief, companionship, and unconditional love. It’s called pet ownership, but who owns who really? Most people will do just about anything to ensure their pet is happy and healthy, and wouldn’t have it any other way.

There are several studies that suggest that the little furballs are even beneficial to overall health and well-being. One of the latest studies (February 2022) by the American Academy of Neurology had three main takeaways:

“Prior studies have suggested that the human-animal bond may have health benefits like decreasing blood pressure and stress,” said study author Tiffany Braley, MD, MS, of the University of Michigan Medical Center in Ann Arbor and a member of the American Academy of Neurology. “Our results suggest pet ownership may also be protective against cognitive decline.”

“As stress can negatively affect cognitive function, the potential stress-buffering effects of pet ownership could provide a plausible reason for our findings,” said Braley. “A companion animal can also increase physical activity, which could benefit cognitive health. That said, more research is needed to confirm our results and identify underlying mechanisms for this association.”

Are you a cat or dog person?

Cats and dogs have different traits, much like the people that own them. Cats can be sweet and curious. They are inquisitive, independent, and vigilant. However, dogs are known for being more affectionate and loyal.

It’s a debate as old as man - cats or dogs? We surveyed over 3,000 Americans to find out which American states prefer cats to dogs, and vice versa. So do you live in a cat or dog state? Keep reading to find out.

You could be fooled into thinking that dogs are more popular than cats, but our data doesn’t agree. In fact, interestingly, it was neck-and-neck. While 25 states said they prefer and own cats, the other 25 said dogs.

Some notable cat states include Massachusetts, Nevada, Pennsylvania, and Michigan. Whereas dog states include California, New Jersey, Colorado, and Texas.

Perhaps the biggest surprise is New York. In the past, the Big Apple was considered to be a cat place. Its cramped living spaces were always much better suited for feline friends. In recent years, this has changed a lot. You will find more dogs than ever before living in the state of New York.

Pet owners are notorious for sharing pictures of their furry friends on social media, but which does it the most?

The conclusion? Dog lovers are more likely to flood the newsfeed with pictures of their pooches. The data also revealed that the average that posts their pet does so twice per month. Unsurprisingly, millennials are the biggest pet-lovers and they post about their pets on social media the most, followed by generation Z.

In April 2022 we surveyed 3,045 cat and dog owners across the US. The average age of respondents was 38.6 years. We asked them if they own a cat or a dog, what state they come from, and how often they post about their pets on social media. The relation to health is one of the main reasons we conducted our survey of cats and dogs in the American states. 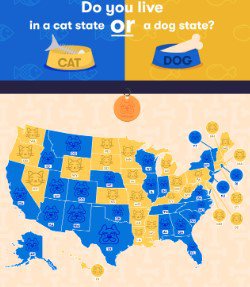 The original article was provided by Elena Ivanovska at time2play.com